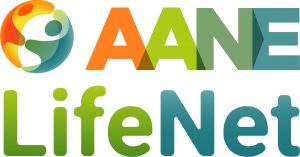 "Who will help me get the support I need as I transition to living on my own?" or "Who can help me continue to live independently as I grow older?" – Adult

"Who can help my adult family member manage their needs and live more independently of us over time?" – Parent

LifeNet offers peace of mind that an adult on the spectrum will be supported as they navigate adulthood by a devoted team of AANE professionals who understand them.

Origin: In 2017, a longtime AANE member (and single mother) searched for long term support for her adult son on the spectrum. Finding no suitable options, she gave AANE a grant to explore a new program.

Began: AANE launched the LifeNet program in 2019 with 15 Massachusetts adults.

Growth: There are now 12 LifeNet staff members supporting over 50 adults in both Massachusetts and Connecticut.

How Do You Approach Supporting Adults?

The LifeNet team uses a strengths-based, adult-centered philosophy in delivering our service. We communicate primarily with the LifeNet adult, meeting them where they are and going at their pace. We center on their own priorities and interests, at any point in time and throughout the lifecourse, serving as a consistent source for accompaniment along the way. Above all, we support and honor the adult’s self-determination: their right and role as their own decision-makers and self-advocates.

What does the LifeNet program provide?

LifeNet offers caring support and companionship for adults on the spectrum over their lifetime across a full range of everyday tasks and responsibilities such as:

LifeNet delivers this personal support and advocacy in multiple ways:

Who’s on the LifeNet Team?

More than just a single caseworker, each LifeNet adult is supported by a team of people who have experience in understanding and meeting the needs of adults on the autism spectrum:

Together, the LifeNet Team serves as both a support network and safety net of professionals who care for and develop relationships with the adults in the LifeNet program, offering them a greater sense of community and belonging. Click here to read actual stories of how the LifeNet Team supports adults enrolled in our program.

Ensuring everyone enters into the LifeNet support program with realistic expectations is key to the success the autistic adult can achieve. We have processes in place to set and maintain the expectations of clients and their families as we work to support them. Read how.