The Kind of “Homeschooling” Plan My Son Really Needs

Like many moms of Aspie teens, I found that after the first couple of weeks of quarantine, my primary concern was coaxing my 15-year-old out of his bedroom, where he was all too happy to be holed up on his laptop. Without interacting at school and studying in the public library, without outside activities and regular appointments, without visits to family or even brisk walks home in the afternoon, what was his life going to be like now — and for how long? My concern was that his world would shrink and he’d become more and more complacent in his retreat from the world. I knew that such a mindset might be hard to come back from.

And let’s face it, while it was nice to see all the well-designed and color-coded homeschool schedules floating around on social media in the early days of the shutdown, those among us with neurodiverse kids know just how well such things would fly in our own households! Ha! All the same, they did give me some ideas and raised a few questions. Mainly, what are the skills my son really needs to work on during this time? How does he need to train his brain? And how can this time at home best be used? In my son’s case, academics are not the issue. Figuring out how to live a good life and how to manage his own brain are the primary concerns.

With that in mind, I created a daily schedule that took into account the needs of a strong-willed, opinionated, and increasingly isolated teenage boy. A kid who, deep down, wants to live a fuller life but struggles to get out of his own head and away from his preferred activities. A boy who can argue like a high-powered attorney to get out of any task he hasn’t bought into and who can wear us down to a nub whenever we keep pushing. If there is one thing we know for certain about these kids, it’s that we cannot make them do what they don’t want to do. Add in some depression and anxiety, along with deficits in executive functioning and emotional regulation (neurological and now hormonal stuff as well), and yeah…you get the picture. This was going to be a challenge.

And so, even in such uncertain times, with all the terrible things the pandemic was bringing about, I decided that I would focus on the silver lining and search for opportunities. With time away from many of the usual demands, we’ve had more family time, and our son now has some time to re-set, focus on wellness and important life skills, and grow and mature a bit before going back to school. After the first week, he told us he wanted to “aggressively go after the depression” and that he understands that holing up in his room is not the way to do that. There was a flash of motivation that I wanted to try to harness. In the end, I came up with a “homeschool” plan that I felt would have the greatest chance of eliciting buy-in and targeting the kinds of habits he actually needs to develop. 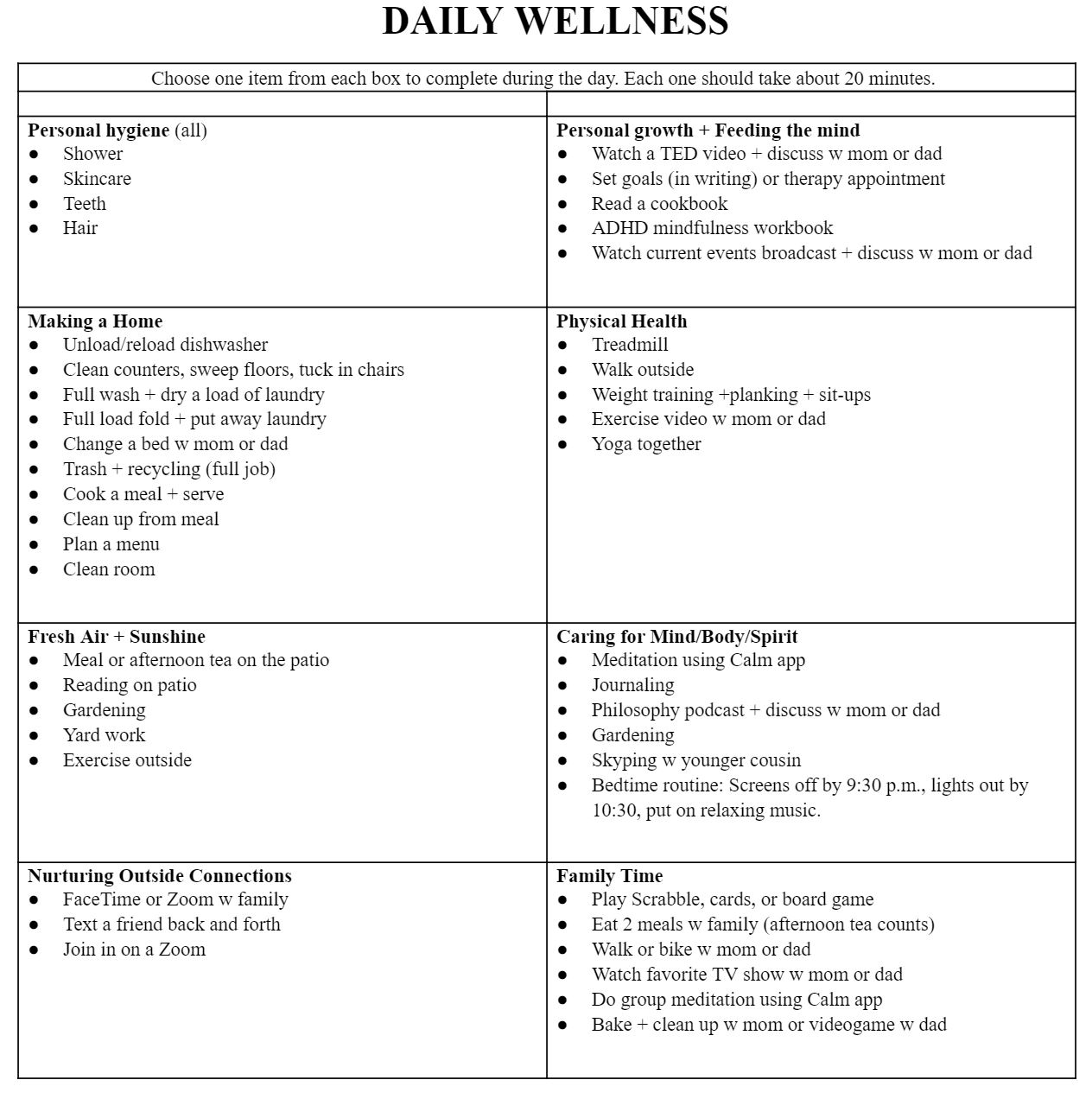 From the start, this “Wellness Chart,” as I like to call it, has been something for us both to do (and my husband may soon join in as well). As I told my son, this is the kind of thing we all need — it’s not something I am foisting upon him. Rather, I am so grateful to have a wellness partner (him!) to help keep me on track with habits that help me maintain and improve my well-being. At work I have a schedule and rely on many routines to sustain me. I have coworkers who can bolster each other’s efforts at staying healthy; my colleagues and I check in about whether we’ve been eating right, getting to the gym, and even drinking our daily cup of green tea! But now? I’m going to need his help. We can hold each other accountable.

To keep the whole process quick and simple, we hang the chart in the common area and cover it with a clear sheet of transparency film. My son gets a red dry-erase marker and I get a purple one. By the time bedtime rolls around, we should have each completed one activity from each of the boxes, which means there should be a red mark and a purple mark in each box.

Well, dear reader, so far the plan has worked! We have been working with this schedule for a month now, and he has, much to my surprise and delight, bought into it. In drafting the plan, I tried to think like a marketer who really needs to know her audience. I used language that would appeal to his sensibilities (e.g., he would hate a category called “Housework” but be drawn to one called “Making a Home” — and who can blame him?). I included mostly tasks he didn’t mind doing and a few that would challenge him. This was no small project, as you can imagine. But I thought about a daily pattern of habits that could address mind, body and spirit in a manner that was least likely to bring about resistance and most likely to create buy-in for my particular son.

After the first few days, he was (shockingly!) on board and even admitted he felt better after doing these things. One thing he didn’t want to do was follow the timeframe. Instead of calling it a schedule, he prefers “personalized to-do list” and wants to determine the structure of his day (with the exception of the hygiene piece, which contains tasks that all get done in the morning before he gets dressed in normal clothes instead of pajamas). Well, if there’s one thing parents of Aspies have learned to do, it’s choose our battles. As long as something from each box gets done each day, that’s good enough for me. I shared this schedule with his therapist and his school liaison as well, and they are both helping to reinforce the importance of self-care. He still needs to do the work that school assigns, but it is well understood among his team that if he is not at his best energy-wise and mood-wise, nothing else is really going to get done well. As I overheard his liaison say to him on one of their video chats: “What needs to come first is taking care of your mind, body and spirit. After that, it’s your relationship with your family. And then academics.” Couldn’t have said it better myself. With our kids, taking care of the social-emotional piece is what helps to take care of the rest.

Nevertheless, plenty of prompting is still required — as if you thought otherwise! But it’s not adversarial. For example, this evening I asked if he’d prefer to help me change sheets, unload/reload the dishwasher, or wash/dry his laundry in order to take care of that box on his chart. He opted for the latter, and his task tomorrow will be to fold and put away all his clothes. For him, having choices really seems to help. He now takes daily walks at a park near home, reads or listens to podcasts about current affairs to discuss with us at meal times (greatly helps to avoid repetitive conversations about special interests and encourages real dialogue), and cooks plenty of pasta and pizza. He does a good amount of baking with me and plays the Wii with my husband — which, hey, is done downstairs as a shared activity instead of alone up in his room!

Over time, these things add up. At first we had to coax him to eat more meals with us “because if you have two of them with us, you get to check off that box,” but now he seeks us out when he’s hungry for lunch or waits for my husband to be ready for breakfast. Best of all, he recently told my husband he wants to learn more coding from him “because it’s good to have marketable skills” — wow! (This from a kid who for the past two years has said he wants to major in philosophy and study consciousness.)

As with all things Aspie, your mileage may vary with such a plan. But the reality is, we’re often the only ones who really know what our kids need and will truly embrace. That puts us in the very best position to design and “market” a home-based plan that will engage and genuinely help these headstrong, vulnerable, and eminently interesting kids to thrive and succeed. No Pinterest-worthy homeschool charts required.

We completely agree: No Pinterest-worthy homeschool charts are necessary. (But if you want one, here you go!)