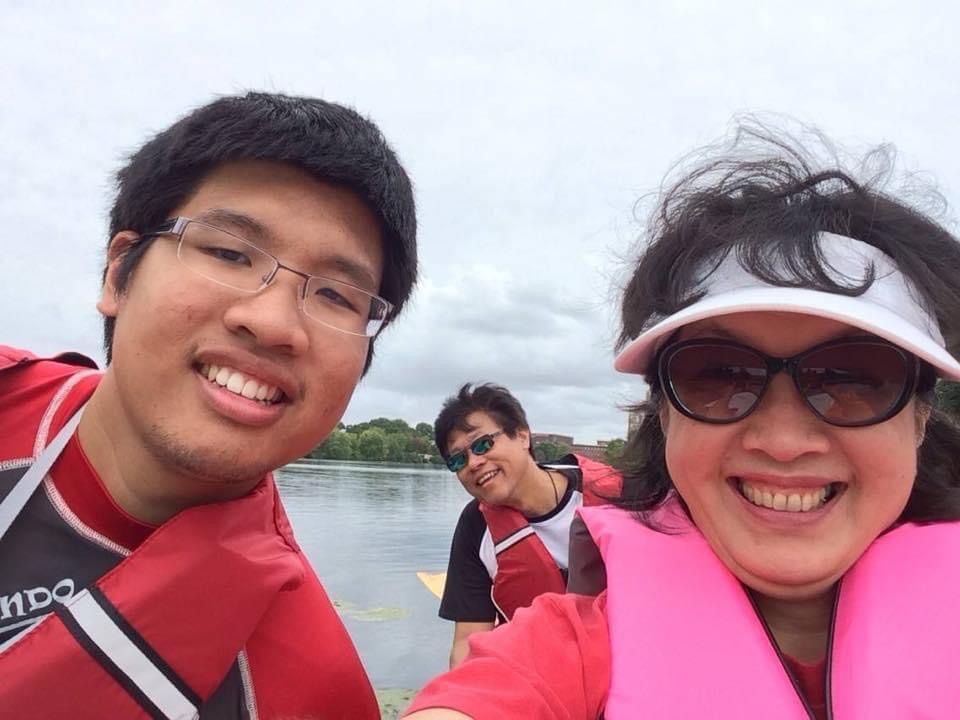 Over the past 25 years that AANE has been working with the autism community, we have had the privilege of staying connected to families as their young children grow to adulthood. Executive Director Dania Jekel talked with parent Stella Chin about her journey with her son and what she has learned along the way.

Dania: I just want to say how nice it is for you to have known you for so many years and for you to have been part of the community —  the whole family. Because you have such a long-term perspective, I want to hear some of your thoughts. How did you connect with AANE?

Stella: I recall joining AANE way back, I think in 1997 or 98 shortly after Scott was diagnosed by Dr. Rosen with Asperger’s. I want us to say how grateful I am having the resource and the community I found in AANE from the very beginning. Because those early years were really rough.

Dania: When you first got the diagnosis, can you just talk a little bit about what that was like and why you found AANE?

Stella: Well, as you know, those are the early days of Asperger’s. So few people understood and knew about it, but I sure was scared and really desperate in a way. I think finding AANE was a lifesaver–finding an organization that understood the diagnosis. Then the support groups really helped because I didn’t feel so alone knowing other parents share the same concerns and fears. In the beginning, it was really, really, really rough.

Dania: Can you just tell us how Scott’s doing now? What is he doing?

Stella: Scott’s into his fourth year as a management analyst at MRC and works primarily with data. He’s doing well in his job, and also he’s involved with a singing group. He loves music.  He plays keyboard, ukulele, guitar, and flute. The flute–thanks to the AANE program with the Berkeley student teachers. He likes to play golf, and Scott has a third degree black belt in TaeKwonDo. He’s a very accomplished young man. He’s so good at trivia; he’s on the trivia team through AANE as well, which he really enjoys. Scott is also very politically engaged and is extremely well read!

So he’s very interested in a lot of things, and I feel really lucky that he’s always been open to different things. From early on, I realized that my job is really to expose him to as many things as possible so that he could find things that he’s interested in. So that turned out to be music, martial arts and sports. He really is a remarkable young man.

Dania: You said those beginning years were so, so hard for you. And your perspective now is so different. Can you talk about how your perspective over the years changed and how you came from difficulty to real pride in your son?

Stella: Yeah. I think in the beginning it was really difficult because of just the shock of getting the diagnosis and not knowing how to handle certain behaviors, like going to birthday parties where he was terrified. We would go to a relative’s house and he would be so scared. He would hide in the basement for two hours. That feeling of being different and the fear that your child will never find his place.

But I think the early years–the struggles were basically the day-to-day stuff, like bathroom, eating, sleeping, behaviors. But I think in our case we were really lucky with Scott because he had such abilities from a very early age. He was hyperlexic. When he was three or so, when he was at my mother-in-law’s house–my mother-in-law who is Chinese–she was teaching him Chinese characters. By the time he was three, he knew 500 Chinese characters.

Stella: Yeah. I would take him with me to my doctor’s appointment and I recall that at three years old, he looked at the sign, and read “gastroenterology.” He has such a special ability, so I think that’s a comfort to me and to him. He just breezed through grade school academically. I would go to his parent/teacher conferences and his math teacher would tell me that Scott asked questions that he had to go research.

We’re also fortunate in that he was very open to my suggestions. I really wanted to build on Scott’s strengths and also his characteristics such as relentlessness. He just will never give up or just walk away from something without finishing it.

But his successes over the years didn’t come easily. I’ve just done so much advocating for him and making connections on his behalf, even when it meant swallowing my pride when necessary. So he was able to be selected for certain summer internships and part-time jobs. Those experiences really helped beef up his resume over the years. Those things are step-by-step strategies building up his skill sets, also getting comfortable in the work environment and learning how to gauge his own behaviors and how to adapt to new situations.

We were really fortunate when Scott went to college at Clark University which was only about an hour’s drive from home. He really just took to living on campus for four years. He loved it. Even though Clark didn’t provide much support for students on the spectrum (doesn’t really deserve its supportive reputation, in our experience), he did find his community on campus. I researched far in advance, found a 3-week pre-orientation for him to attend, and encouraged him to join a number of clubs I thought he’d enjoy: he thrived being a part of the Black Student Union, the Asian Student Association and concert choir. (I knew he’d be welcomed because Clark is 60/40% girls to boys so they’d need a bass!) He really thrived in college. And he also was very fortunate because one of his math professors who was the head of the department kind of took him under her wing because she recognized that he was really special, highly intelligent and motivated. He would be the only student waiting at her office with a list of questions. Over the years, Scott has worked really hard to succeed, but also he was open to the connections I made and the advice that I gave him very often.

I should emphasize that making connections directly with teachers and others on his behalf helped them understand and appreciate Scott’s special character and abilities. He couldn’t advocate for himself so he couldn’t develop those relationships on his own. Even during elementary, middle and high school years, I invited his teachers and aides to dinner so they could get to know him.

Dania: I think for some folks, it’s the anxiety that holds them back. And I don’t know if Scott has that anxiety or if he can deal with it.

Stella: He does. Over the years, despite his successes, he had challenges. There were a couple of times in high school where he got in trouble, where I had to really, really delve into the issues and really talk through it with him and say, “Okay, this is what happened. What do you think about what you did? You know it led to this unfortunate outcome. So next time when something like that happens, when you feel this way, what should you do instead?” So we talk about all those things constantly. Scott saw the Newton South psychologist regularly, and when he ran into speed bumps at Clark, he saw counselors there regularly – but only because I advocated for that.

Scott’s biggest challenge is maintaining friendships: those connections that he’d made, that he needs to nurture and maintain, and reconnect with people. And he’s had a hard time.  I often have to remind him, “Well, why don’t you reach out to so-and-so, why don’t you say this?” And I’ll send him a script. He’s always receptive. So he’s still using my scripts to reach out to people. That’s still his biggest challenge.

Dania: What services or supports are missing for people like  Scott. What would you like to see?

Stella:  I think there’s a big part that the organization could play in terms of employment. I think for a lot of young people on the spectrum, they don’t have the advantages that Scott had or that I have through my professional circles and connections. I think there really needs to be a big push towards the development of a stronger connection, or a partnership with other organizations or big employers, such as universities, healthcare, technology. I think the organization really needs to find, maybe in its membership, connections to those employers and to build on the ability to find opportunities for AANE members. Anything would help.

Dania: Employment has been an issue for a lot of our folks, and sometimes it’s hard to exactly know how to solve that problem. These are some really good ideas. If there’s one thing you want your son to know, what would that be?

Dania: Is there anything else that you’d like to let folks know–either parents, professionals, teachers, other adults?

Stella: I think, well, certainly being a parent of a child with Asperger’s, it’s not for the faint-hearted. Before this journey, I was a totally different person. I think I’ve had to really step up in order to advocate for him. You know, school team meetings where it’s just me against 10 staff people–gatekeepers. Every step was demanding and you really have to make those efforts, and it’s always going to be outside your comfort zone. You are never going to see the successes unless you actually do the work. I’ve certainly reached out to many resources that I knew of. That’s what I think is necessary. Even as parents of young neurotypical adults make/exploit connections on their children’s behalf (getting internships, jobs, etc.), parents of those on the spectrum must work much harder to make these connections because our young adults are not skilled in “selling” themselves. Organizations such as AANE can strengthen the employment piece, which I think would go a long way in helping young people become independent, whatever that independence means to us.