This was originally presented at a luncheon for members of the AANE Grandparents Group on April 4, 2017.

My name is Charlie, I have Asperger’s, and I’m here to talk about my grandma.

Ruth Kendall Houlton O’Dell Lewis (or Grandma Ruthie to me) was born in 1920, the 2nd of 6 children, to a well-established family in Elk River, MN. Like any good Midwesterner of that generation, she believed in hard work, civic duty, the importance of higher education, and probably that all of that would pay off by making a better world.  She graduated from High School at 16, and then, in 1941, with a degree in economics from Carleton College, headed off to New York City to graduate school at Columbia and work as a banker like her dad. But, when the second world war ended, and all those young men came back needing work, she cheerfully gave up her job as a loan officer, and married a returning sailor. They eventually went back to Minnesota, and raised three girls. Grandma Ruthie’s mother used to say of her own 25 grandchildren, “I’m just glad none of them is too smart or too dumb, or too beautiful or too ugly – being about in the middle is so much easier because you can just tend to your business.” Grandma Ruthie might have thought that was a funny thing to say, but she probably more or less agreed. 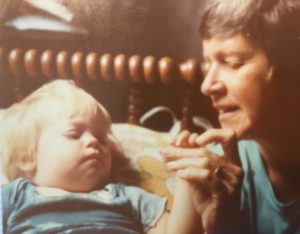 When her first husband died at 50, Grandma Ruthie married her distant cousin, a widower, and raised his four boys, easily converting from Girl Scout leader extraordinaire to hockey mom. She and that husband eventually retired to San Diego, and when she was widowed again she filled her life with travel, outdoor adventures, and volunteer work, rising to the rank of Citizen of the Year for her county.  Until she was 85, she always said to her family, “The best thing I can do for you is to have a life of my own,” and when she was 85, even though she loved California, she said, “OK, now it would better if I lived closer to one of you while I’m well enough to meet new people; which one of you should I live near?” She survived lymphoma for 15 years, and then when treatments stopped working, she said, “I love you all. It’s such a beautiful world. Thank you so much,” and died.

If she saw a job that needed to be done, she did it; if she saw a person in need of support, she supported them. But if everything was going OK for her family, she came to visit just often enough and never stayed more than a week. She was a strong, intelligent, fun, thoughtful and a realist. She left behind her three very accomplished daughters, 7 admiring stepsons and sons in law, and many accomplished grandchildren. And also me.

My grandma and I were quite close for much of my life, despite having nearly opposite personalities. She always seemed to possess a boundless source energy, and was on her feet more often than not right up until the end. I, on the other hand, tended to stay seated until movement was absolutely necessary. This actually worked out really well; during the time I lived with her, we only needed half as many chairs.

I think Ruthie recognized that I was different early on, because apparently she was always much more critical of my sister than of me. Which I of course totally failed to notice at the time, because how other people treat each other was really not on my radar until very recently. But my sister definitely noticed. She assumed it was a first-born thing, or maybe boys just get better treatment in that side of the family. But I think Ruthie noticed I had a social deficit, even if there wasn’t a word for it yet, and cut me some slack because of it. 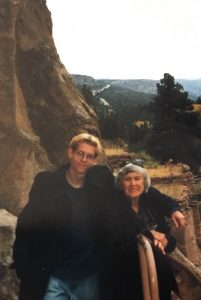 She continued to cut me some slack as I chronologically grew up (remember, we didn’t know anything about that ⅔ developmental delay.). After I squeaked through  high school, I went and joined the Air Force because I was trying to rebel against very liberal and permissive parents. Long story short, it didn’t go well, and I spent the last half of my tour in a military brig coincidentally near San Diego. Amazingly, every Sunday afternoon, and with no words of recrimination (saving those for my parents to provide) she would drive an hour each way on those southern CA freeways and visit me, sitting and chatting in a pleasant courtyard surrounded by concertina wire. When I was released, she invited me to come and stay in her condo for awhile while I got my life together (hopefully) and she even got me a job doing office work at one of the charities she volunteered for.

Well, I did actually try to get my life together but didn’t succeed right then or several other times, and yet through it all Grandma Ruthie was there – timing an Elderhostel week so she could also visit me at college on parents weekend, agreeing to participate in my wedding ceremony even though I forgot to mention it until the rehearsal, and seeming really proud to have me as her dance partner at her senior community’s New Year’s Eve party. 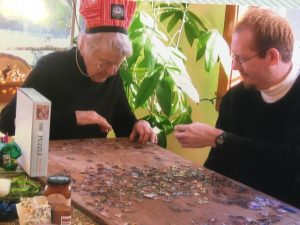 I think what really stands out to me about our relationship is, no matter how much Ruthie expected of herself or her own children, my Grandma always seemed glad to see me and never made me feel like her happiness depended on my accomplishments. That’s something that parents do a lot; they’re so invested in their children that they can’t help but put pressure on them to reach their full potential. And sometimes that pressure is a good thing, but a lot of times it isn’t. Sometimes, especially for those of us on the spectrum, our full potential isn’t what standardized tests say it should be.

So our parents naturally have dreams for what we should do or how we should grow up.  And when their best efforts fail to deliver, sometimes they can’t help but take it to heart. And sometimes it’s impossible to hide their disappointment, even from someone who doesn’t read emotions well. I don’t blame them at all; I think it’s a natural reaction. But it is going to take its toll on our emotional well-being.

And that’s why grandparents are so essential, not to mention fun. They already pinned their dreams to the accomplishments of their own children. By the time they have grandchildren, they’re free to offer unconditional love and support, no matter how they turn out.