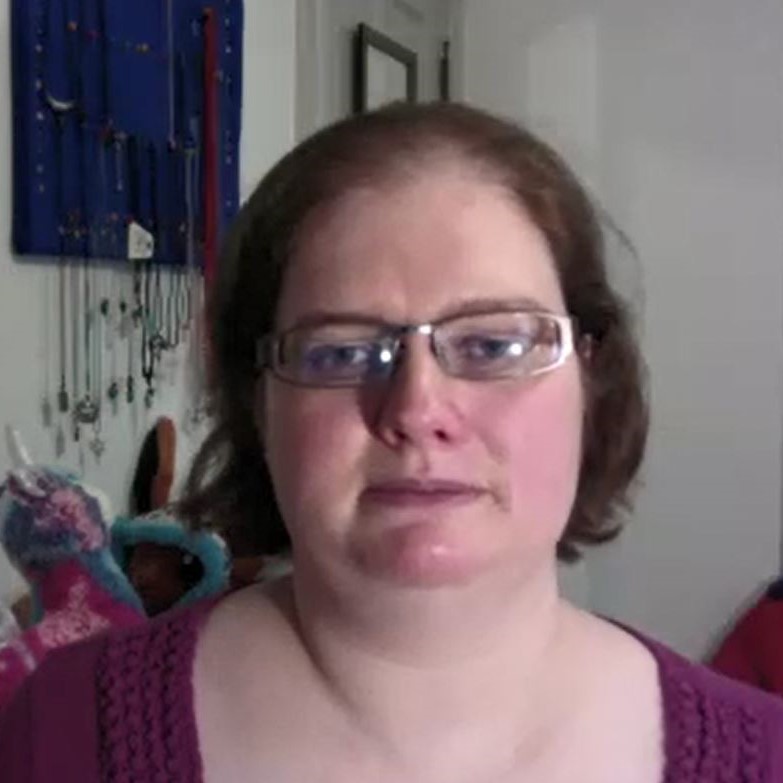 Caitlin Medlar has been a part of the AANE community since childhood when she was diagnosed with Asperger Syndrome. As AANE celebrates its 25th year, we asked Caitlin, now 31, to discuss her experience growing up on the spectrum and what helped through different stages of her life. In this interview with Executive Director Dania Jekel, she shares challenges and successes that she thinks parents, educators, and other young adults on the spectrum will find helpful.

Dania: Welcome, Caitlin. Thanks for speaking with me. Let’s start at the beginning—tell me a little bit about your early school years.

Caitlin: I went to a public school that took a pretty mainstream approach. My success in school depended a lot on the teacher’s aides that I worked with. The special needs educators who got me through middle school really knew their stuff, and so did a few of the ones who worked with me in elementary school and high school, but there were some other school years when the staff who were assigned to work with me didn’t understand what it meant to be on the spectrum — they saw me as just another case study rather than taking the time to get to know me as a person. Having someone in your corner who really gets it and who gets you makes all the difference in the world.

Dania: Can you share a little bit about making friends and building relationships in those early years?

Caitlin: I’ve definitely had my issues making and keeping friends. I remember late elementary school and the transition from elementary into middle school as being pretty difficult. I wasn’t bullied or picked on — at least not before my classmates and I reached our preteen years. But, for the most part, I kept to myself and I didn’t really have any idea how to go about making friends. I was able to get involved in theater around fifth or sixth grade, and that gave me something of a social life and a way to be around other people who had similar interests. But I didn’t begin to develop enough self-confidence to be significantly successful at making friends until I was a sophomore in high school. And even then, I was painfully awkward. Then again, a lot of high schoolers are.

Dania: How did things change for you in college?

Caitlin: College was an easy time to make friends because I still had the structure of extracurricular activities. After college was a lot more difficult. There’s much less social structure in place. Unfortunately, I tend to worry that if I make even the tiniest little faux pas, anyone who sees it will not want to be around me and not want to be my friend. Of course, being on the spectrum, I unintentionally make a lot of faux pas. So I’m working on not being so afraid that people are going to automatically reject me out of hand if I do something wrong, and that’s helping me to start rebuilding my social life. But it’s a major source of anxiety for me.

Dania: Tell me more about how Asperger’s impacts your life–what it brings in terms of strengths and challenges.

Caitlin: Creativity is one of my greatest strengths. In school, studying things like theater or literature, I could easily notice patterns in stories and I could get to the heart of the matter easily. The stereotype of people on the autism spectrum is that they don’t understand human behavior and are better at things like math or science. For me, I can recognize patterns, not only in ideas, but also in the way that people act out their ideas and in human behavior.

As far as challenges go, I struggle with numbers. (Sometimes I wonder whether or not I might have undiagnosed dyscalculia on top of being on the spectrum.) And, as I mentioned, I still get anxious. I have learned how to not look like I’m anxious most of the time, but then I have to deal with the buried anxiety later.

Dania: Have you developed any strategies for dealing with stress and anxiety over the years?

Caitlin: Stories have always provided a way for me to figure out how the world works. As I got older, I got more into video games as well. Escaping into the story of a book or a game, or even just making up my own little bit of fiction can be a way of taking a step back. I am able to pull elements out of a stressful situation, put them into a fictional situation and kind of rearrange them into what might be a good way to deal with them. Drawing is another way I can get my thoughts out on paper and take a look at a visual representation of what I’m thinking or feeling at the moment.

Caitlin: Yeah, a lot of the early research was done on young boys and how they presented. When I talk to other women on the spectrum and how they came to the realization that they were on the spectrum, I often see a lot of differences between my experiences and theirs. I was lucky enough to be diagnosed early on, but for a lot of women on the spectrum, they did not have that. So they did not have early access to resources, and a lot of them are just now figuring out their own spectrum-ness and trying to get the support they need.

For me, I do think that may be part of the reason that some of the teachers’ aides who worked with me early on had a difficult time figuring out where I was at. I can’t make any definitive statements, but thinking back on it now, it could have been that they were working with a preconceived notion of what someone on the autism spectrum is like. It’s possible that their expectations were based on that early research that was mostly done with boys on the spectrum. And autism is not a one-size-fits-all thing.

Dania: Right. Was there something that your parents did as you were growing up that you’re really grateful for, or that was really helpful?

Caitlin: One thing that my mother talks about is how, when I was a toddler and I first started showing signs of being on the spectrum, both of my parents were working. My mom actually quit her job and became a full-time, stay-at-home parent at that time. She did go back to work later (my mother has been keeping AANE’s database neat and organized since their early years), but back then, she left the workforce because I clearly needed full-time support and encouragement to come out of my shell a bit more. If I remember back far enough, there were several years that my father worked two jobs in order to be able to support the family financially, since my mother was at home looking out for me. Not every parent or family is in a situation where they are able to do that for a child on the spectrum, but in my case, I’m grateful that my parents could do that for me.

Another thing that I’m grateful for is that, early on, when my parents had no clue what being on the spectrum meant, they did their research and got involved with programs like AANE. They worked to figure out how to connect to a network that could get me the support that I needed. In any situation, whether it’s work or school or anything, it’s essential to have people who have your back and who are willing and able to support you.

Dania: What have you learned over the years that you want to tell others on the spectrum–specifically teens or young adults?

Caitlin: I would say that even if you don’t find yourself in the spot of the “school star” right now, don’t sweat it too much. Don’t worry about it affecting your success later on in life either, because you still have a lot of life ahead of you and a lot of experiences and a lot of learning to do. Nobody has everything all figured out. I definitely didn’t have everything figured out when I was 14 or 17. I’m 31 now, and I still don’t have everything figured out, but I like to think I’ve gotten somewhere.

Dania: If you could tell your teachers one thing that would be important for them to know if they have a student on the spectrum in their classroom, what would that be?

Caitlin: I would say, “There’s nothing wrong with your child.” I know that raising a kid on the spectrum can be scary. They might not hit all the milestones you expect them to at the times you expect — but don’t bother trying to keep up with the Joneses because you’re not going to be able to. There will be times when your kid is going to struggle, and it’s going to be hard to watch them struggle, but don’t sell them short, either. Your kid might struggle with some things, but that doesn’t mean they can’t do them.

Dania: Looking ahead, where do you see yourself in five years or in 10 years? Do you have an idea of where you’d like to be?

Caitlin: I’m still trying to work that out. I’ve managed to find a job that’s a good fit for me, and that has some potential for moving forward, but I’m also still working on other creative projects. I still write, I still draw, I take music lessons. I’d like to have those creative skills so that I can do something with them if the opportunity presents itself. I’d say that you might not end up exactly where you planned, but just keep working on yourself and keep developing the skills that you have. So right now, I’m focusing on continuing to develop my skills and move forward and see where it takes me.

Dania: Thank you so much for speaking with me, Caitlin, and for being a part of the AANE community.

Caitlin: I’m glad that AANE has been around for such a long time and has been able to help so many people. Having a good support network makes all the difference for people on the spectrum. It helps us to live our best lives, to be ourselves, and to function in a world full of neurotypicals, many of whom don’t always understand what life is like for us. I hope that AANE is able to continue doing what it does best so that people on the spectrum are able to keep on getting the support that they need.